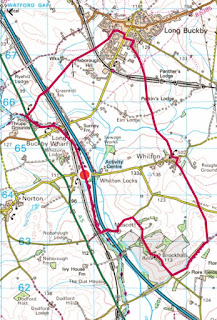 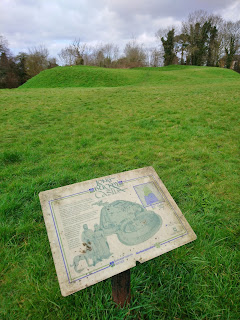 We are starting off today at Long Buckby out towards Daventry in Northamptoshire. I have been doing one or two more local walks of late and have covered these off in previous write ups so its good to venture into pastures new as they say. The Castle ring-work is known locally as The Mounts,  and lies in the centre of the village. It was a bit tricky to find actually. Archaeological evidence suggests that it was built by 1150 AD. Many
Many Norman castles were built of earth and wood and were defended by a timber wall built on an earth bank surrounded by a ditch or moat. It is officially a ring motte with at least one bailey, and perhaps originally two. 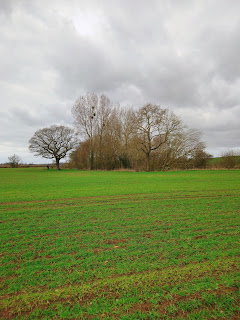 We are walking in a clockwise direction today. The route takes us over the railway bridge across fields towards the village of Whilton. It is listed in The Domesday Book of 1068 under the name 'Wiltone'. The Parish Church of St Andrew is constructed from the local Northamptonshire Ironstone and was built between the 12th and 13th centuries. Little remains of the original, having been restored in late 18th century

We spend a bit of time looking around the churchyard. Outside there is a memorial to Captain Harry Reynolds VC MC.Harry was a Whilton man, whose bravery and character during World War I brought him to the attention of the nation.

We pick up the footpath that crosses the Little Brington Road towards Brockhall. 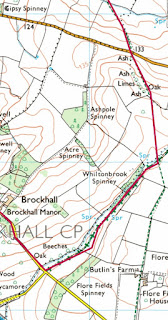 Brockhall, like many estate villages, is a small settlement that has developed around its eponymous hall. The village - Brocole in Old English, which means Badgers Hill - was recorded in the Domesday Book. There are some lovely old buildings, full of character and it is a charming little hamlet. 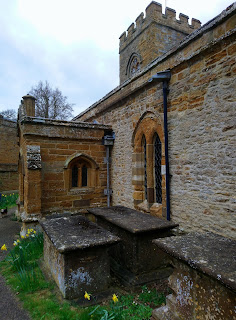 We pass through the lost village of Muscott just to the north-west of the village of Brockhall, although the two places are identified as separate settlements.The site consists of the earthwork remains of the deserted medieval village and of a double moated site, the location of the Muscott medieval manor house. The gatehouse to the present Muscott House is considered to be late medieval in date with 19th-century additions and is listed Grade II.

We cross over the busy M1 and drop down on to the Grand Union Canal running alongside the M1. 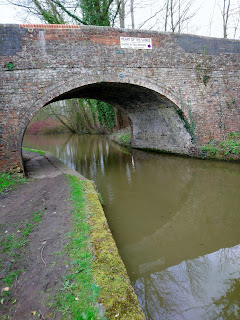 We follow the canal along it's path up to Whilton Marina. A flight of seven locks that are also referred to as Buckby Lock Flight.The locks are numbered from 7 at the top of the flight to 13 at the bottom. To the south of the flight is a long level pound, which stretches 14.6 miles (23.5 km) to the Stoke Bruerne Canal Museum. 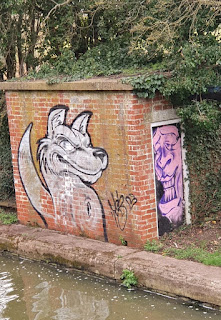 As always there is some interesting artwork on display along the canal. Some better than others lets just say. Being a Fox lover I particularly like the one pictured above with the sinister face around the corner. We continue up to Long Buckby Wharf as far as the New Inn. We then cross over the A5  followed by the bridge over the railway line and the M1. We follow the footpath past Greenhill Farm towards Hoborough Hill. From there we are almost back to the starting point and it is a matter of finding where we left the cars! 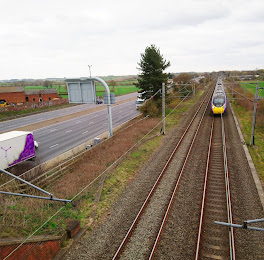 It has once again been a cracking walk , a bit breezy at times but generally good walking conditions. In total the distance covered was a fraction over 11 miles.

Good to be back on the 'Shakespeare's Avon Way' footpath once again. Starting point is exactly where we  left off last time in t... 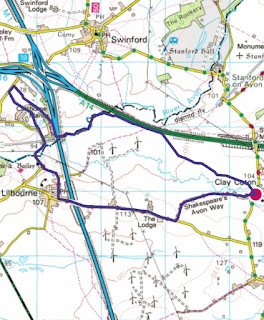