Another year and the start of another long distance footpath. We are about to start on the 'Heart of England Way'. A walk of around 100 miles (160 km). The walk starts, or ends at Bourton on the water (Gloucs) and finishes at Cannock Chase (Staffs). As always we will be completing circular walks rather than a linear route.

The starting point today is actually the Cotswold village of Lower Swell. Perhaps that makes us a 'couple of Swells'?

Eventually we head off in the right direction after going 180 degrees the wrong way....Almost miraculously the rain has stopped! The forecast is 86% heavy rain all day. Which indeed it has been all the way down. I'm taking no chances though , full wet weather gear is the order of the day , complete with Bushman 's hat. I look the part if nothing else , although probably won't win any prizes for style today. 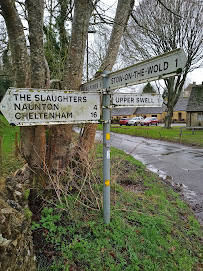 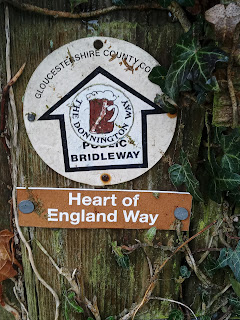 It's official we are on our way and there are plenty of signs to confirm it too! In fact it seems to be the epicenter for all sorts of walks and ways as a photo will soon confirm. I quite like the look of the 'Donnington Way' though which seems to be something of a glorified pub crawl. Named after the Donnington Brewery it is a 62 mile circular route linking up 15 pub sections. What could be better?

We are heading towards 'The Slaughters', surely one of the most inappropriately named places in the UK .I believe that the name derives from the Old English 'Slough' meaning wet land. It is certainly living up to It's name today at least as the fields are soaked.

The village is built on both banks of the River Eye.We will only pass through Lower Slaughter but the river continues to Upper Slaughter. 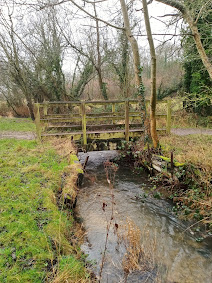 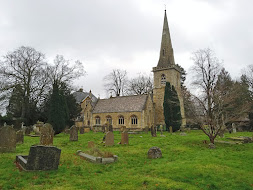 This is quintessential England, a tourist mecca of course in different times. Not many people around today all things considered. In 2013, the Parish Council opposed an icebox tricycle selling ice creams seven days a week, six months of the year, arguing that the trading times were excessive. Increased footfall would prevent the grass from growing and children could climb on the trike and fall into the nearby river... I wish my grass would stop growing and isn't it part of growing up falling off bikes, and paddling in rivers. We passed the Cricket ground which made me smile, Slaughters United CC.Enough to strike fear into any would be opposition for sure.

Bourton on the Water is our next port of call. No sooner have I managed to get the tune of 'Bring your Daughter to the Slaughter(s) (Iron Maiden) than another one pops in. I now have 'Smoke on Bourton on the Water' (Deep Purple milling around). I have been here several times before and it has always been rammed with tourists. Very quiet indeed today though. 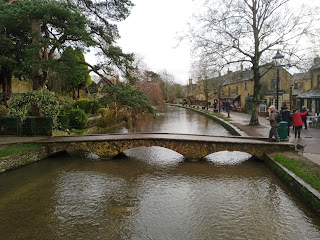 Bourton-on-the-Water at the heart of the Cotswolds is famed for its five stone bridges. Dating from between 1654 and 1911, the bridges are constructed from local Cotswold stone and give the village its nickname of ‘Venice of the Cotswolds’.

Rising in the Cotswold Hills near Taddington the River Windrush meanders gently through. It flows for about 35m until meeting The Thames.

Leaving Bourton we pick up the Oxfordshire Way towards Wyck Rissington. Things are also getting muddier underfoot, as we embark on a time travel trail with a replica Iron Age Roundhouse. 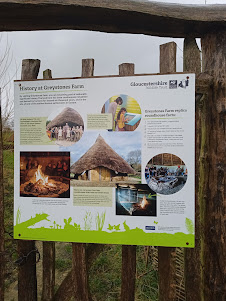 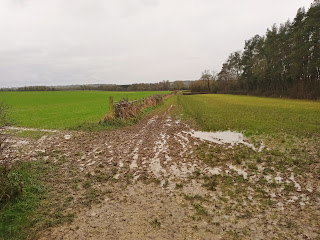 Owned by Gloucestershire Wildlife Trust, Greystones is home to wildflower meadows, Iron Age ramparts,  working organic farm, and an interactive Discovery Barn. As well as the a replica Iron Age roundhouse pictured above.

Salmonsbury Camp, the site of Europe’s earliest known towns, is a scheduled monument located at Greystones. It is recognised as a good example of an Iron Age fortified enclosure and for the extensive archaeological finds collected from the site. 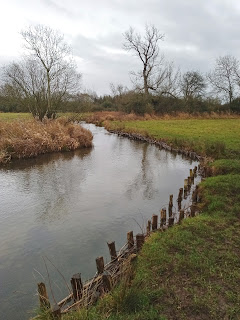 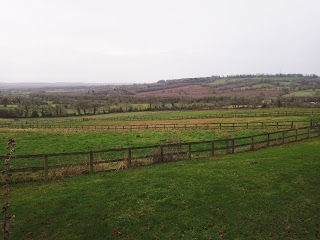 We are climbing slowly towards Stow On The Wold. We walk alongside the busy 'Fosse Way' before taking the 'Macmillan Way' path. There are some stunning views to our right. The light is starting to fade and there is more light rain so the photo on the left doesn't do the view justice.

By the time we reach the old market town of Stow On the Wold it is much darker. Siting on top of an 800-foot (244 m) hill it has been the toughest part of the walk. I didn't get a decent photo at all sadly due to the light. I will post the only one taken which isn't very good.... 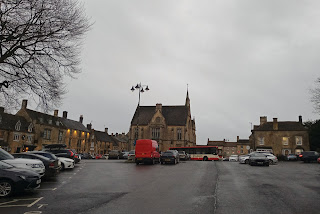 Keeping the musical theme going John Entwistle the Bassist with The Who lived in a Victorian Manor here for 27 years from 1976. Built on a hill near to Lower Swell apparently with 55 rooms,

Known for a macabre sense of humour, Entwistle kept skeletons in the master bedroom to frighten guests.

The mansion 'Quarwood' and some of his personal effects were later sold off to meet the demands of the Inland Revenue. Rather ironically he had worked for the agency from 1962–1963 as a tax officer before being demoted to filing clerk, prior to joining the Who.

We are well on our way  towards our start point at Lower Swell and The Heart of England Way. The most widely accepted theory behind the name "Swell" is that it relates to a spring that rises in the grounds of the Abbotswood Estate to the north of the village and is an abbreviated version of "Our Lady's Well". The well can still be seen today.It is pictured left with 'Archie'

It is now nearly dark and the legs are feeling the 12. 6 miles covered today. A good start to the new walk and the weather exceed expectations too!

The H of E Way from Bourton The H of E Way entire route Today's circular route Another year and the start of another long distance foo... 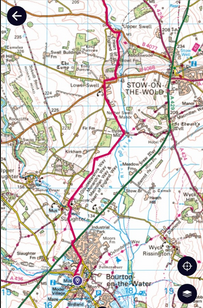