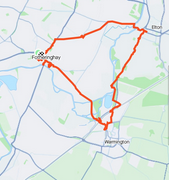 A very appropriate day to be walking in this most historic of Northamptonshire villages. It is the Platinum Jubilee of Elizabeth II, to mark the 70th anniversary of the accession of Queen Elizabeth II on 6 February 1952.

As the home of the great 'Yorkist' line, the village was, for a considerable part of the 15th and 16th centuries, of national standing. The weather is perfect for walking, sunny spells and a warm temperature. We park up close to the Falcon Public House. We are about 4 miles North East of Oundle, and  10 miles west of Peterborough. The pub sign depicts the heraldic shield of Richard III. The last king of the House of York & the last of the Plantagenet dynasty. 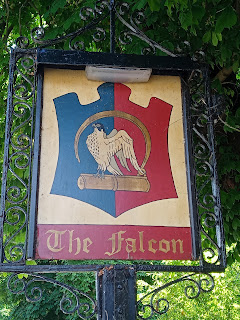 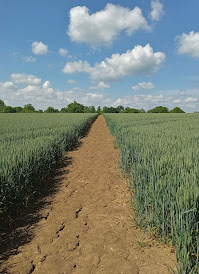 With the church tower looming large in the distance we set off down the Nassington Road. We cross the bridge over the river and pick up the footpath on the right hand side that is very clear. It takes us through a deserted farm and barn. That really would be some restoration project!  But what a spectacular setting though. We are heading in the direction of 'Elton' We are crossing the water meadows of the River Nene. 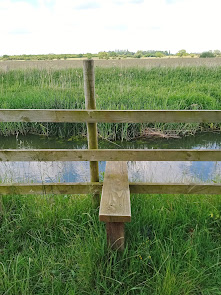 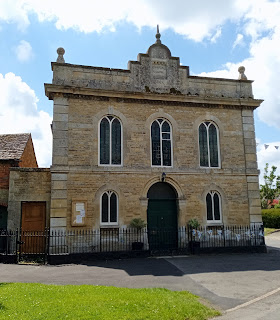 The derelict Elton Mill was listed Grade II in 1988. Though the original mills are long gone, the present mill dates from the late 18th century and belongs to the Elton Estate.

I don't like the look of the stile very much though.... There is a steep drop straight into the River Nene!

We pass the Wesleyan Chapel, appropriately enough located on Chapel Lane. The sun is out and it is lovely around here. Very peaceful and quiet. A few houses are decked out in bunting and flags but otherwise a tranquil scene. We sit for a few minutes on a bench just before taking the track to Elton Hall Park. There are great views back across the field towards Elton Hall.The home of Sir William Proby, is a part Gothic house, which stands in the midst of this unspoilt parkland and 3,800 acre Estate. 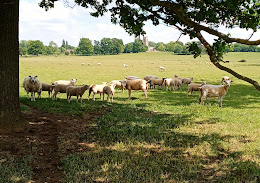 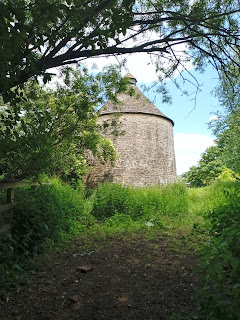 It's a lovely part of the walk, although we do have to cross over a busy road at one point. We take the opportunity to stop at The Red Lion, Warmington.A nice pint of 'Dark Star' 'Hophead' 3.8% soon follows.We are soon back on are way, backtracking a little down an area called 'Eaglethorpe'. We have also picked up the Nene Way footpath too. Slightly off track is the Warmington Dovecote, well worth a small detour. Even if it did involve climbing over a padlocked gate on the footpath.

The Romans probably introduced Dovecotes into England. Their use was later revived by The Normans in the 11th Century. They usually housed Pigeons, bred for their meat. Birds would enter through a covered entrance at the top called a Lantern or Glover.I managed to get inside the very small doorway for a better look! 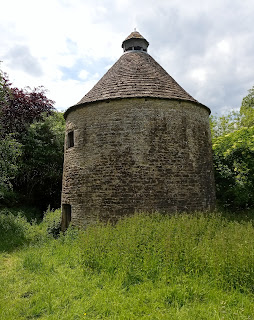 Inside there would typically be around 800 nest boxes. The ones in Warmington are unusual as they are made of wood instead of stone. There is a a rotating ladder (called a potence) giving access to the nest boxes. 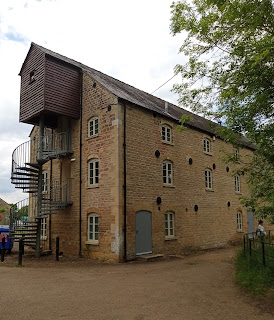 In the 17th & 18th century eating Pigeon was believed to prevent the plague and other diseases. Pigeon droppings were used to make potions to treat baldness, gout and tumours.  One procedure still popular in the 17th century, involved slicing open a live Pigeon and placing it on the patient's head or feet. This was supposed to cure melancholy (depression). Enough of all this Pigeon nonsense!

We arrive at the Water Mill via an underpass cover in murals of local sights. The Mill seems to have been converted into private residencies. There is a flutter of activity as three Grey Wagtails emerge around the flowing water. They are far more colourful than the name might suggest! The grey wagtail has a very long, black-and-white tail, a yellow rump and a yellow belly. It is grey above with black wings. 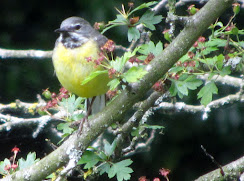 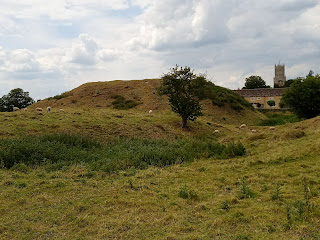 We are now heading back towards Fotheringhay and the Church tower looms large in the distance. Another lovely stretch and we then get a view of what remains of Fotheringhay Castle. The castle was a typical Norman motte and bailey, with a conical mound protected by a bank and ditches, and topped by a timber keep.Only the earthworks and the conical motte remain of Fotheringhay Castle, standing on level ground above the peaceful River Nene.Richard III was born here on 2 October 1452, and though tradition says he was baptised at Fotheringhay church.Richard only lived here for six years until he was moved for safety to Ludlow Castle.

I can't resist climbing to the top of the mound/motte. The view are spectacular too. The Castle is probably most famous for being the final place of imprisonment for Mary Queen of Scots. In 1586 Mary, Queen of Scots was brought to Fotheringhay from Chartley in Staffordshire to stand trial for treason.

Mary was tried at the castle on 14 and 15 October 1587 in a show trial and predictably found guilty on 25 October. She was not executed immediately, for Elizabeth I was reluctant to sign the death warrant, but finally on 8 February 1588 Mary was executed in the great hall. Accounts of the execution vary, and may be inaccurate, but tradition says that the executioner was nervous and made a poor job of his work, taking two or three blows to sever the queen's head.

One version says that when the head rolled from the body the executioner went to pick it up by the hair only to have the 'hair' prove to be a wig and come off in his hand. 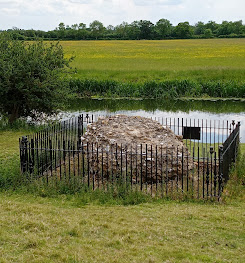 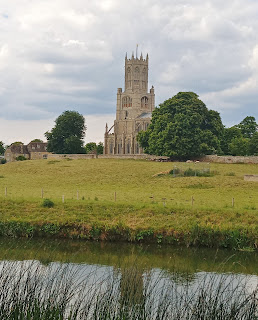 50 years later, in the 1630s, the castle was dismantled & most of the masonry removed, leaving only the earthworks.

Close to the river is a small section of masonry wall protected by an iron railing.There are three commemorative plaques on the railing; the first simply says that this section of masonry is from the castle keep, the second was set up by the Stuart History Society and commemorates the death of Mary, Queen of Scots, and the third plaque was set up by the Richard III Society and commemorates the birth of Richard at Fotheringhay Castle.

The picture of the church is something that is well worth taking a small detour for. Sadly the sun has now disappeared and not quite the photo I had hoped for. There is even more history in the village. The the old water pump and the commemorative plaque from the Richard III Society. 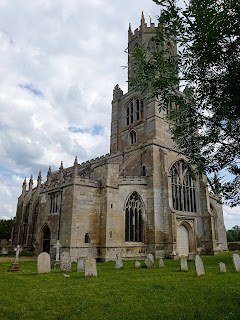 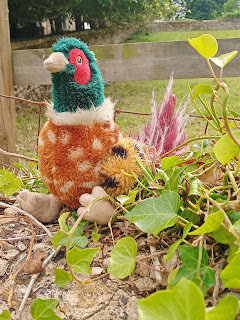 Only one thing left on this fascinating historical walk. To take a closer look at the Church of St Mary's and All Saints. The present church was begun by Edward III who also built a college as a cloister on the church’s southern side. After completion in around 1430, a parish church of similar style was added to the western end of the collegiate church with work beginning in 1434. It’s the parish church which still remains.

It is noted for containing a mausoleum to leading members of the Yorkist dynasty of the 'Wars of the Rose's. In 1495 the body of Cecily Neville, Duchess of York was laid to rest beside that of her husband the Duke of York. It is very much worth a visit.

Lots of bird life too on this walk with lots of Red Kites circling above. The most colourful bird though was this little fellow sitting atop of a wall watching the world go by. The walk was scheduled to be just over six miles but actually came in at just over eight with all the interesting diversions.

It's great to be out walking again following a knee injury. The old knee is still far from perfect but should be good enough as they say... 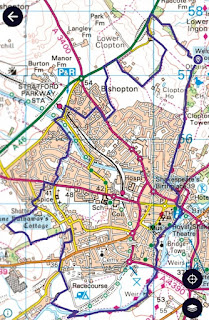