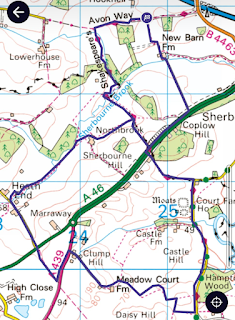 Bit of an inauspicious start today. We are setting off from  a 'pull in' at the side of the extremely busy A46 Warwick Road dual carriageway. Somewhat hampered today, with a very swollen knee from overdoing it a bit lately. A quick dash across 4 lanes of fast moving traffic is not ideal really.

We are already running late due to numerous road hold ups along the way. I'm quietly relieved the the proposed walk today is cut short. 'Hampton Lucy ( a place and not a person) will have to wait until another time.

We have a small circuit to complete around 'Snow Hill' and up to 'Ardenhill' Spinney so as not to miss any of 'The Shakespeares Avon Way'. Of course we then have to come back across the dual carriageway. Either side of the road there is however beautiful open fields and woods to explore. Not to mention moats! Although previous experience tells me that there is rarely any water to be seen sadly. 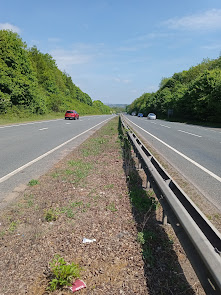 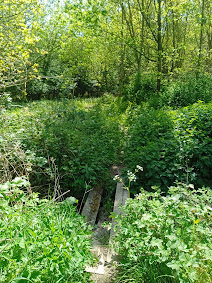 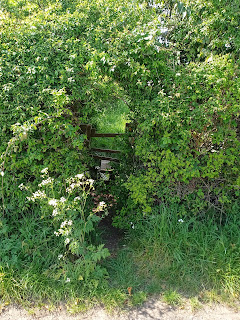 We manage to safely negotiate the most rickety of footbridges and stiles too. More punishment for my poor old knee, perhaps this is a walk too far? Only time will tell. Already I am regretting putting the old shorts on today. Not only does the 'fly' refuse to 'do up' which is embarrassing enough. I have also got my first nettle stings of the year too. I am very sensitive to those, and know they will be tingling for the rest of the day.

Looking back there are some smashing views towards Warwick with the spires in the distance. About halfway along Fulbrook Lane between Sherbourne and Hampton Lucy is Hampton Wood. Lots of cars are parked up as visitors view the Bluebells Celandine. We only trail the edge, but over the hedge it looks a rich carpet of wild flowers in their Spring time prime. 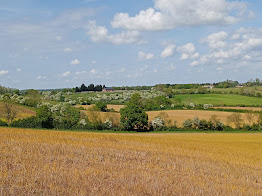 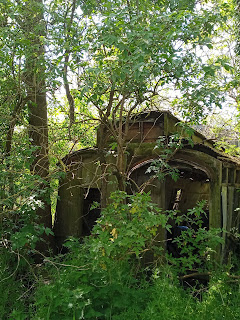 Hidden and rotting away in the bushes is an old wooden railway carriage. Probably well over a hundred years old I would imagine. Makes you wonder how things end up where they are sometimes? Amazing what you can come across sometimes.

We cross a field of very inquisitive cows. I'm quite please that there is an electric fence between us. Particularly as a huge Bull is amongst them. I must apologise for the awful photo, nut you get the gist at least.They were moving fast in my defence. The bull is the big one at the back!

We move into a beautiful lush green meadow, lots of wildflowers too. There are also a few other surprises too as we progress further. 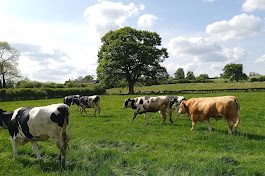 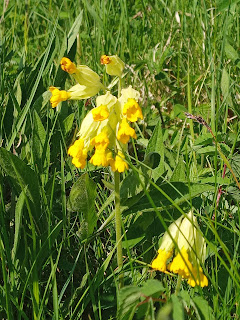 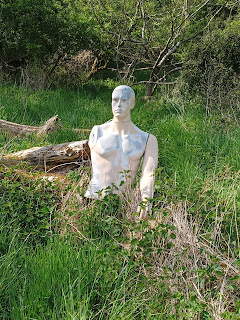 From a distance it looked as though a very pale figure was watching us.... Closer inspection revealed it was a mannequin, or at least the torso of a mannequin. Can it still be a torso if the head is attached? Also there appeared to be an arm missing too.There were no bullet holes so it was being used for target practise either. A bit further on there were more of them!  One appeared to be sunbathing! This time they were inside a 'Pheasant release Pen'. Obviously they must be some form of Scarecrow to keep other birds or predators away.

We also saw some fence-post signs for the 'Via Beata' long distance path. I had only seen these before around Little Harrowden in Northamptonshire. The pilgrimage path that crosses the country from Lowestoft to St Davids in Wales. 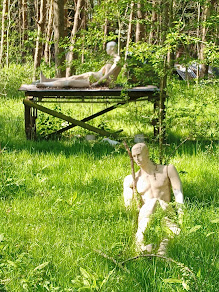 It is with some relief that we complete the walk! My knee is worsening with every step and is very swollen.Even cutting short the route we have covered a distance of 9.2 miles.It has been enjoyable even though there were not really any obvious buildings or points of interest. We look forward to venturing to Hampton Lucy next time out.

Bit of an inauspicious start today. We are setting off from  a 'pull in' at the side of the extremely busy A46 Warwick Road dual c...