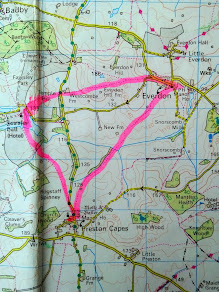 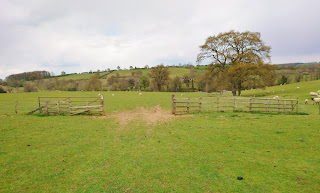 A little bit of unfinished business to be addressed starting in the beautiful village of Everdon.

A couple of weeks ago the 'Bluebell Walk' sadly didn't reveal any Bluebells. However it did whet my appetite to return and expand the walk to some other wonderful areas within walking distance.

We follow the same  footpath as in our previous Everdon walk. This time parking in the centre of the village, close to the Church. Hopefully where we should emerge once we have visited Fawsley and Preston Capes. It's a slightly cloudy day but with the odd glimpse of sunshine to warm us up. All being well it will stay dry. Up on the ridge it is quite breezy and I'm thankful for the lightweight Jacket I remembered to bring for once. 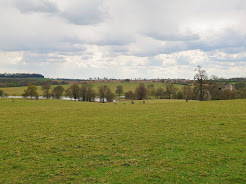 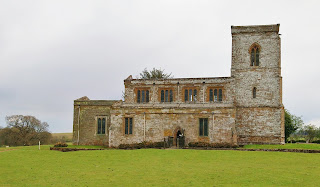 At the last Census Fawsley had a population of less than 100 and is included in the civil parish of Charwelton. The hall and the church are all that remain of Fawsley.

Fawsley Hall and landscape park was created by the Knightley family. Richard Knightley, a well-to-do Staffordshire lawyer, bought the manor of Fawsley in 1416.Fawsley Hall Hotel dates back to Tudor times. Queen Elizabeth I stayed at the property in the 16th century, and its rooms still retain period features from the time. Guests can also enjoy views across Fawsley Park to the countryside beyond. I remember attending a wedding here about twenty years ago and that was some occasion. The service was carried out in St Marys Church (pictured above). 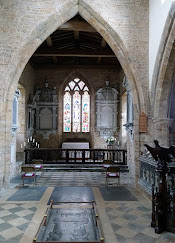 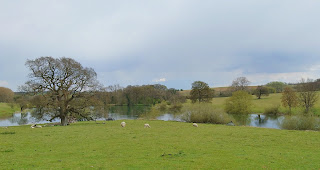 The church contains the Knightley family tombs including effigies of the 16th-century Sir Richard Knightley and his wife Jane. Dating to the early 13th century, the church has many fine features such as carved poppy heads and stained glass thought to be from Sulgrave Manor. 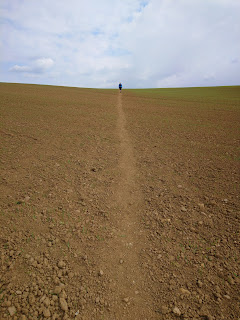 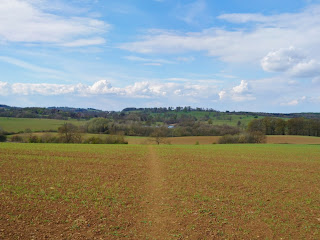 As is sometimes the way, particularly when I'm navigating , the footpath disappears. According to the map we should continue straight ahead. However the field is beautifully ploughed and crops are starting to show.

Rather than 'plough on'.. or so to speak we go around the large hill. Unfortunately I have chosen the long way round.

At least the footpath in the next field is nicely outlined and easy to follow.

The view towards Preston Capes are just spectacular. 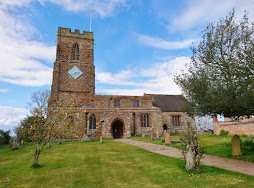 Leaving the field we plod on up the lane to Preston Capes. 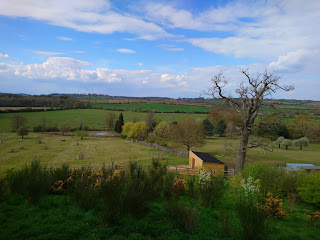 The church of St Peter and St Paul has stood in Preston Capes for over 750 years. Parts of the medieval structure still remain today. Dark ironstone was used in the construction of the south arcade and light-colored limestone was used for the north arcade.

The churchyard contains a number of graves dating back as far as the 1600s, as well as the base of a former preaching cross.

There is a lovely bench at the rear of the church with cracking views looking back towards Fawsley. The perfect spot you might say for the second part of the pic-nic. 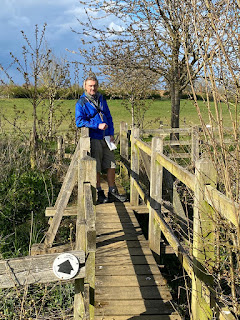 Joy upon joy there is also a motte and bailey!  The earthwork remains of the motte and bailey castle at Preston Capes stand on the summit of a north facing spur on the north east side of the village. A good example of an early post-Conquest castle and is located close to a Cluniac Priory. Although the motte mound is relatively small, the earthworks are well preserved.

The motte was the site of a castle built soon after the Norman Conquest, most likely by Nigel of the Count of Mortain who held Preston in 1086.

We take a walk back down the lane to pick up the next footpath that will take us all the way back to Everdon with any luck.

The battery on the phone has worn right down through following the cricket, snooker and football  so few photos on this leg unfortunately. Lovely wide open spaces and a couple of derelict old buildings, perfect escapism and peace and quiet. 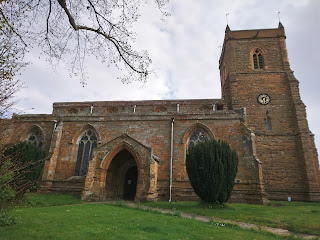 The footpath brings us out down the side of St Mary's Church in Everdon. Saint Mary's church dates from the 14th century, and was built in the decorated style. It has been suggested that an earlier structure may have sat at this site prior to the current building.

Local ironstone was used in the construction of the church, and it is believed that the Bernay Monks were involved in the work, importing their own stonemason from France to complete the work. 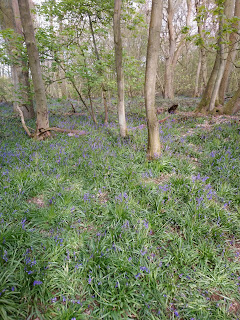 Having finished the lovely walk of just under 7 miles there is one more piece of the jigsaw to complete. We drive back up the hill to Everdon Stubbs and where the Bluebells are pretty much now in full bloom.

The perfect end to a perfect walk!

A little bit of unfinished business to be addressed starting in the beautiful village of Everdon. A couple of weeks ago the 'Bluebell ...