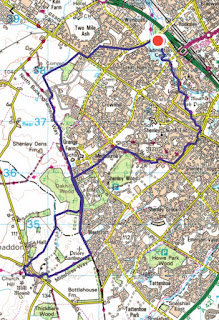 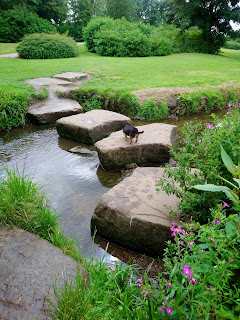 Back out and about again in leafy Milton Keynes on the Swans Way. I wonder what treats the walk will throw up today ?

Starting point is where we left off last time . Right next to the National Badminton Centre in one of the many park areas. It's lovely to see the streams running clear and free of litter.

It's not long before we happen upon our first place of interest!

Shenley Church End looks a very affluent area with it's large houses. It is also home to the Shenley Toot, a 13th-century motte and bailey castle. A fortification with a keep, on a raised area with a walled courtyard essentially.
Today only the motte is left and seems to be guarded by a herd of cows....Originally the home of the Earl of Chester it is now classed as an ancient monument. 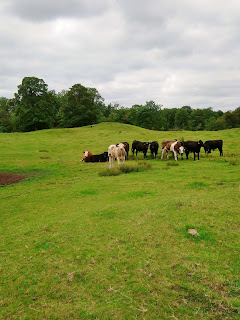 The Toot mound and moat are most probably Anglo-Saxon. The high mound immediately outside the moat is a 20th century cover for a water cistern. One of the surrounding earthworks could be the platform of the medieval Manor House demolished in 1774.
Livestock grazing has taken place at The Toot for many years and is the most efficient way of maintaining the grassland as well as encouraging the development of wildflower species. 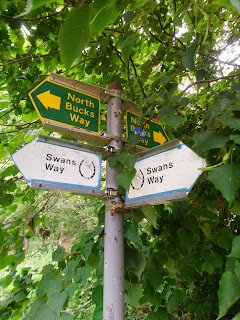 We pick up the Swans Way as we head towards Oakhill Wood.On the other side of the path is HM Prison Woodhill. We can see the high wire fencing through the trees and decide not to get too close.
It is an A cat prison and one of the eight national high security prisons.It has around 600 men, mainly remand prisoners and those serving short sentences, alongside a small number of category A lags. The most notorious being 'Charles Bronson' ..... 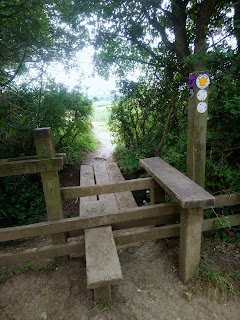 The landscape is a bizarre mixture of the old and the new. Massive developments are taking place , new housing and business parks . All this amidst long established villages fighting back the tide.

A single Oak Tree stands defiantly against the surge. On one particular housing estate and old shack of a building still remains amongst the high tech new builds. Somehow surviving a potential compulsory purchase order and more to the point still resided in.

Milton Keynes is certainly a City of contrasts. We loop back around Oakhill but it isn't long before we are confronted once again by the diggers ......... 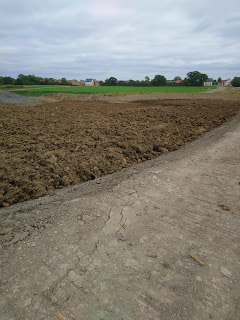 We are slap bang in the middle of our footpath according to our digital map . Unfortunately the path no longer exists. You guessed it , the path has been built over and subsequently moved.
It was gone 3 PM and getting back for a BBQ at 4 PM was starting to look a bit unlikely.
After some perseverance we at last found a cut through that got us back on track thankfully. 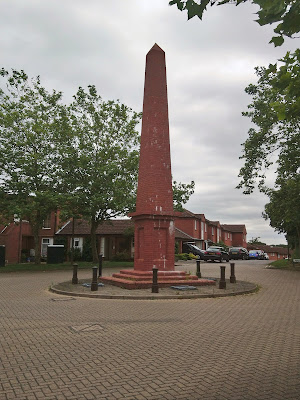 On the last leg of the walk two things summed up Milton Keynes for me. Firstly on a  housing estate an Obelisk had been erected on a roundabout.

The 30ft high Great Holm structure was built in the early 1980’s when the estate was first developed.
Standing at the highest point of the estate, it has become a prominent landmark.
Secondly our old friend the delivery robot , slowly but steadily making it's way to it's destination.  I witnessed a couple blocking it's progress with a pram.Undaunted it simply backed up a little and went by the obstacle with the minimum of fuss.
Another intersting walk at just a touch over 11 miles in total. 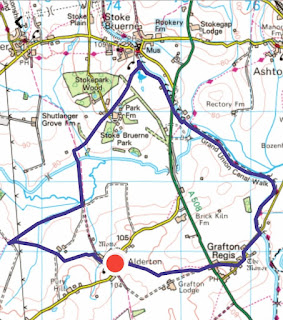 Another sun baked day and another part of the county  to explore. I really wanted to try and see Stoke Park Pavilions near to Stoke Bruerne but it was going to be tricky. The public footpaths didn't run very close and unless their were views thorough the buildings and trees it would be near impossible.

What a lovely village Alderton is ! Beautiful cottages and green fields surrounding and total quiet, I'ts like a ghost town or rather a village. I can't ever recall coming here before?


Their is a surprise immediately, before we even get on the footpath in the 'form' of the Mount. The disappointment then comes after climbing the rickety old staircase to find an empty space....#The Mount is an ancient monument and found fame after Tony Robinson (Baldrick from Blackadder) took his 'Time Team there in 2000 to excavate the area.

Iron Age, Roman and Saxon artefacts have all been found on the site which is now know to have been the site for a two storey castle. It would…
Read more 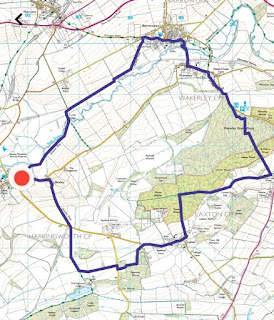 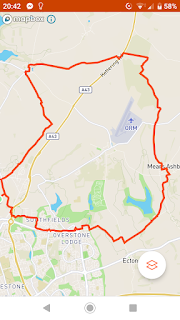 The peace didn't last long though as we had to navigate the usually busy A43.Quieter than usual but a horrible road , always best to err on the side of cau…
Read more