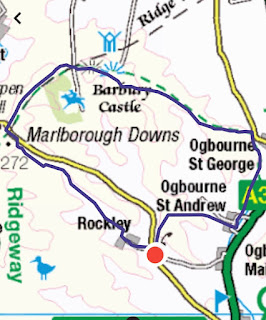 Very much looking forward to this leg of the walk , the penultimate one of our quest.
Another Iron Age Hill Fort, more racing gallops and potentially another White Horse to track down. What more could a rambler wish for?


We started the walk in the pretty village of Ogbourne St George this time . We walked through OSG on our last walk and got very muddy crossing the river.
According to the sigh the River Og is a 'winterbourne'. For the uninitiated as I was, a 'winterbourne' is a stream or river that is dry through the summer months. A winterbourne is sometimes simply called a 'bourne' from the Anglo- Saxon word for a stream flowing from a spring, although this term can also be used for all-year water courses.

Winterbournes generally form in areas where there is chalk.  When it rains, the porous chalk holds water in its aquifer releasing the water at a steady rate. There was an awful lot of water flowing through the village from all the recent rain. 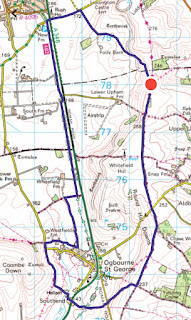 Back on The Ridgeway for the first time in 2020 ! Been a whole host of reasons for the delay,  not least illness on all parties involved and atrocious weather. It was a bit of an effort to remember where the last walk had actually finished

The weather on the way down was mixed with some very heavy showers The forecast though was encouraging but still the chance of a shower or too.

It was only a short walk from the car parking space to get on to The Ridgeway , always prefer to get on it early really.


There was some very nasty black cloud quickly moving our way , thankfully we only caught the edge. I was particularly grateful not to have to unpack all the waterproof gear.

Looking to our right we had views of Swindon in the distance. The track was particularly rutted and with all the recent rain very muddy. 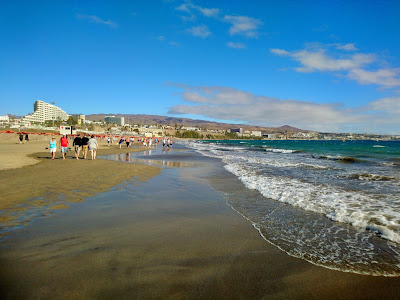 Nothing better than Christmas in the warm sunshine and blue skies of the Canaries. Our first  time in Gran Canaria and it won't be the last for sure. Total escapism from the awful commercialism and pressure to spend, spend spend. No endless rounds of the same songs repeated year after year. No hype, no fuss just people going about their day in a chilled out and relaxed way. Just perfect !

It's a four hour flight to Gran Canaria off the Northwestern tip of Africa.

A decent flight helped by a stint in the lounge at the airport and a few settling Whisky and Gingers.As well as the odd Guinness of course.

The second most populous of the Canary Islands with a population of 846,717 and third largest in size terms.

We are in the south of the island , traditionally better weather but less green than the north. The journey from the airport late afternoon didn't look too encouraging.. Lots of wind farm activity and very barren. Thankfully the hotel was far more inviting. Up on …
Post a Comment
Read more 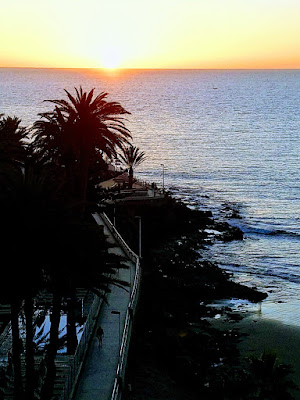 Every morning we were treated to a glorious sunrise. The early morning joggers were out and a few Germans had already laid out their towels and bagged their sunbeds for the day.

I did manage to get down into the sea a couple of times before breakfast. But being the Atlantic it was pretty cold until you got acclimatised to it.

Something very special about  hearing the sea and the waves crashing. A very mindful experience. Laying in bed at night and just relaxing to the backdrop of the sea.

Plenty of choices at breakfast I must say. I liked to balance the Pink Prosecco with  a smoothie each morning . Although the Prosecco generally won in the end.
Tempting as it was to hit the sunbed terrace I tried to get a good walk in after breakfast. There is a beautiful promenade in both directions.

We tended to do a mixture of beach and promenade. It was a good walk to get right to the tip of the coast past the sand dunes. Lots of kite surfers in the water too . 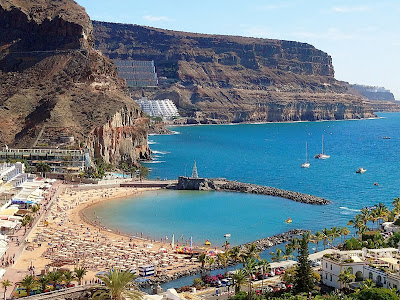 Just a shortish bus ride from outside our hotel to the beautiful resort and fishing harbour of Puerto de Mogán.

Set at the mouth of a steep-sided valley on the south-west coast of the island. The canals and bridges of its seawater inlet have earned it the nickname "Little Venice."

Along the marina, you'll find an assortment of restaurants and bars, while the old town area is full of quaint, Mediterranean homes and cottages climbing up the hillside. Puerto de Mogan is a major stop for ocean yachts travelling from the Atlantic to the Caribbean.


When we arrived around 10:15 the sheltered sandy crescent shaped beach  was virtually empty. An hour or so later and it had become quite busy with sunseekers and bathers in the calm waters.


There are so many little alleyways to explore  and it is a most glorious location.

I had spotted a viewing platform high in the hills and made a mental note to try and find a way up after some light refreshment. Given the slightly upmarket …
Post a Comment
Read more
More posts