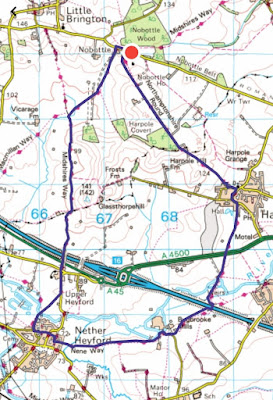 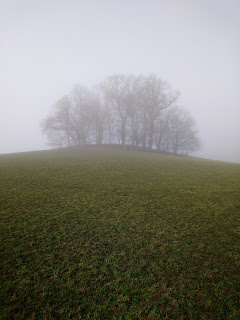 The starting point for today's walk is the historic village of Harpole. There has been a sharp frost and it is extremely foggy, in short it is freezing!

We travel and park in separate cars in accordance with government guidelines. Starting point is close to the church, through a gate and hey presto we are into open countryside and once more on the Northampton Round. I think I mentioned the NR on the last write up therefore this time I have included a map o the entire route. It is a total distance of 54 miles approx. While doing a bit of research I found out that someone had completed the entire walk in a day. Starting at 6:30 in the morning and finishing late at night. I believe that it was a mixture of a walk and some jogging. Considering he went wrong a few times it was a really good effort. Ironically enough it was someone that I once worked with too. The walk today will take us past Harpole Covert and as far as the Nobottle Road.

We turn back on ourselves , picking up the Midshires Way. We really are out in the wilds now. As we progress we have Glassthorpehill on our left. Not that we can see it of course with the fog obscuring any views. 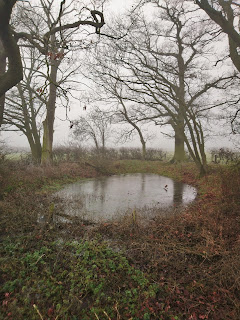 Looking at the map we are a good distance from the nearest road . As you would imagine aside from the odd sheep it is extremely quiet. The water troughs are completely froze, the ice is a good inch thick. We break it up just in case the sheep feel a little thirsty.

There is the occasional pond too so it is a great area for wildlife. The fields are littered with rabbit droppings ! No rabbits just the droppings in vast quantities.

It is famed for having one of the largest village greens in the country. 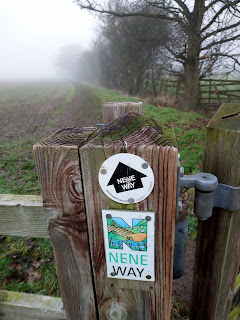 We are now on the Nene Way! And following close to the River Nene.  There are few people about today, heeding the advice to stay indoors. I think we have seen two other people so far and no sign of life in either of the villages.

The next point of interest is the Heygates Flour Mill at Bugbrooke Mills. There has been a mill at Bugbrooke, on the very same site, since before 1086. This extraordinary fact is known because the mill was mentioned in an early publication of the time, the Domesday Book. The Heygates, a family of Northamptonshire farmers, took it over in the late nineteenth century. The direct descendants of the first of these millers still run today’s mill, which is the group’s main location, producing the biggest share of the company’s flour output from its three mills. over 200,000 tons of wheat is milled annually, resulting in 150,000 tons of flour. This is mainly for bread production, including a large share of Fine Lady Bakery’s needs, but is also for biscuit manufacturers and other specialist areas. 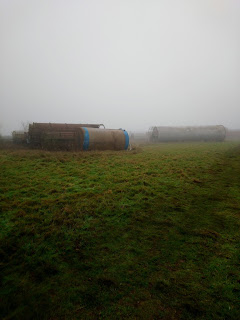 Around the mill there must be at least thirty abandoned wheat silos. These fallen giants portray a very eerie scene amongst the misty gloom. It is more like a scene from Cape Canaveral or a US military base missiles silo. Many of them are rusted and rotted and must have been there for years. I would have thought there would have been some scrap value at least? 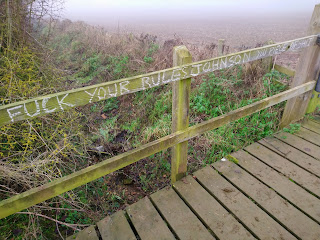 We continue along the Nene Way and there are some interesting pieces of social commentary to be seen...On all of the bridges someone has scribbled in chalk anti government messages. Clearly not a big fan of Boris Johnson that is clear.

Some nice scenery along this stretch with the water flowing nicely. The water has a very deep turquoise colour to it , never really noticed that before . Maybe it's something to do with the fog?Back under the M1 and across the A45 we go. We seem to have saved the muddiest fields for this last part of the walk 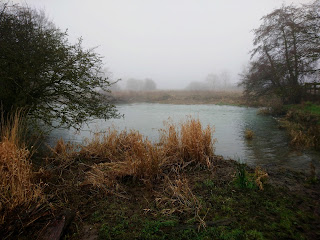 For good measure the farmer has bolted the gate fr the final footpath. After we have climbed over the footpath is non existent. We skirt the edge of the field and hope we are going in roughly the right direction.

Finally we reach an exit gate and we are back in the village of Harpole.

It has been a decent walk, one that I would like to do again on a nice clear day. Total distance 8.5 miles.

The Northampton Round Walk The starting point for today's walk is the historic village of Harpole. There has been a sharp frost and it i...