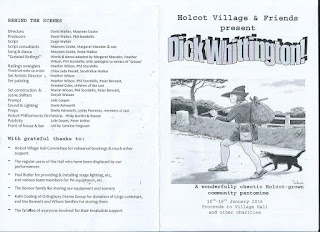 It's the morning after the final performance of Dick Whittington. There is a covering of snow on the ground, my throat is sore and there is a feeling of emptiness inside me. My Lord  Mayors Tricorn hat with it's feather at half mast sits redundant now a poignant reminder of what has been achieved over the last two days. 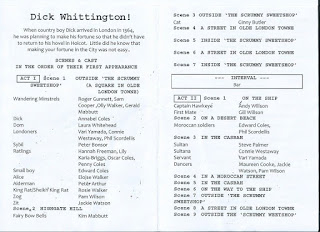 But it's not just about the last two days at all ,it's so much more than that. This has been my life for the past three months! So maybe it's understandable that I should feel so flat? Like the child feels once Christmas is all over and the tree and decorations have all been packed away maybe? I expected to feel relief and be glad it's all done and dusted. Instead i'm left  wanting more , the buzz and adrenaline rush of being part of something, a 'connectedness' that is no longer.
How did it all start ? All because of the man pictured above Andrew Willson, oh and alcohol...
We happened to be out one night when he told me that it looked as though he would probably have to play two parts in his upcoming pantomime. Quick as a flash I said ' I'll do one'. Quite a bold statement considering i'd never even been in a school play. Bravado some might say, madness others.


Whatever there was no going back, despite reservations afterwards I felt that I couldn't let Andy down and looked on it as a huge challenge. So I decided to throw myself into it right from the first rehearsal in early November to taking on some marketing. This included a couple of Radio slots including Radio Northampton and Nene Radio with Andy Cole pictured above.

I remember that first rehearsal all too well. The rest of the cast had been practising for a few weeks already so were quite familiar with the script. I felt a fraud as they all seemed very professional and I was pretty much blagging it. I did the read through and the Director David Walker must have felt sorry for me or just desperate as he offered me the part!I do recall him saying 'Peter, you've got something....' he never did elaborate on that. Whatever it was I left the Village Hall feeling ten feet tall and determined to learn the lines as quickly as possible. I enjoyed the rehearsing every Thursday evening and looked forward to it.

Learning the lines was a different matter and they just wouldn't sink in. It didn't help not knowing who was who and sometimes somebody else would stand in if there was an absence. It took me a month to differentiate between Dick and Dom which i'm sure they found equally frustrating. Having just about got my head around the amount of lines needed for the part of 'Boris Fitzwarren' Alderman or Lord Mayor of London a further surprise was in store. I was expected to take part in a song and dance routine, they don't tell you this when you sign up do they! Now i'm no singer or dancer come to that so how was I going to pull that off?


Now Boris as well as being Lord Mayor of London only happens to own the worlds largest sweet shop, oh yes he does. He has a lovely daughter called 'Alice' who talks mostly in cockney rhyming slang. Someone and I think it is 'Dom' the hapless shop employee happens to mention that if Boris was in America he would be called 'The Candy Man' .... cue the music. I originally started off by trying to sing and dance properly in time with the other cast members on stage.

I never quite made it so decided that as my character was loosely based on 'Boris Johnson' I would 'bumble' around deliberately getting it wrong. I did have a big finish however! This involved sliding on my knees to the front of the stage complete with 'big jazz hands' singing 'The Candy Man Can' at the top of my voice no holding back. I just about got away with it I think? 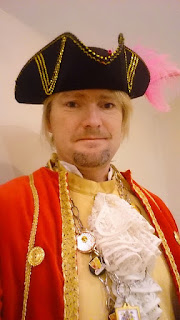 I have to say I rather like my outfit. Originally I was only kitted out with the purple Lord Mayors coat so had to search round a bit to accessorize and adapt. This included borrowing the Mayor of Wellingborough's back up chains. In the panto the dreadful King Rat aided and abetted by his 'ratlings' and not forgetting 'Zit and Zog'are forever planning and attempting to steal.

Most of my appearances are in Act 1 which is set in London. In the second half most have the cast have set sail for the Sultan of Morocco's casbah. Act 2 does involve a costume change for me no less. The reality is that I do only change my topcoat from the purple to a red one. The consensus did seem to be that the red one did suit me better and looked slightly more regal. On the Friday of the first performance I was there on the stroke of 5pm just as David was unlocking the venue. The last thing I wanted was to be late and rushing around like an idiot. Inside the first thing I spotted were the two barrels of beer.David suggested I might want to try them out, maybe he detected a few first night nerves? Anyway the beer flowed and tasted good an omen maybe? 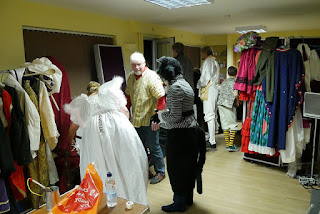 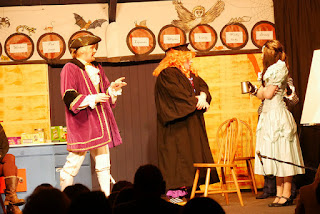 I had a nervous wait to make my appearance,some twenty minutes after the curtain goes up. I sat backstage anxiously reading through my lines for the millionth time. First on stage were the 'wandering minstrels' to warm up the audience.

They made several further appearances throughout the performance. I managed to forget to take my reading glasses off as I made my low key entrance stage right. In my haste to discard the glasses I managed to knock a tin of sweets off the table. I am happy to relax backstage for the most part of Act 2 as our heroes set sail for Morocco. But the voyage is ill fated as King Rat furious as not being able to steal my Lord Mayor's chain has vowed to bankrupt me.

With the chain safely stowed in the Tower of London he is sure to try and sink the ship and steal my entire stock of sweets. Not only that he has a Moroccan cousin 'Sheikh King Rat' who reeks just as much havoc over there. Sure enough the rats do there very worst and the ship is sunk despite the best efforts of Captain Hawkeye and his First Mate to stay afloat.

The cast are washed up on the beach and captured by the Sultan's guards and taken to the Casbah. Once the Sultan realises they are 'Fitzwarrens people' they are released immediately. The Sultan calls for his dancers and the fun begins! A plot is hatched to trap 'Sheikh King Rat',Dom falls in love with the Sultans sultry daughter 'Sultana' and 'Sybil' well is just Sybil.... All goes pretty much according to plan and the Sultan generously provides a ship for safe return to London.

A quick straightening of my feather(that isn't a euphemism by the way)and i'm back on stage again. This time in splendid isolation just me and the audience. I'm all ready to welcome back our intrepid travellers, but where are they? The audience soon let me know that Tin-Tin is back , quickly followed by Sybil and Alice. An emotional re-union soon takes place but all is not what it seems... Alice and Sybil have somehow swapped roles and it's all very confusing for poor Boris.

Things get a whole lot more confusing when Sybil asks Boris to marry him! But they are not alone the hero 'Dick' gets his Alice and 'Dopey Dom' gets married to 'Sultry Sultana' so happy endings all
around 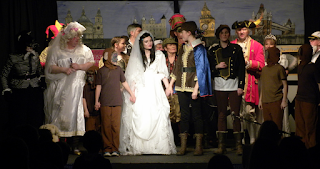 For me a fantastic experience and I think I just about got away with it? I would like to thank everybody involved in the production not just the performers but those behind the scenes who were very kind to me. I really hope it won't be the first and last Panto with the good people of Holcot. A considerable amount has been raised for charity, i've made some good friends along the way, had a lot of fun and that's what it's all about really!

I'm looking forward to the 'big screen premiere' of 'Dick Whittington' being shown to all those associated in the Village Hall shortly. Somehow think I shall need to take my own red carpet though. Finally just as we were all leaving snow was falling which did seem very appropriate. Yes 'Excellent indeed, and a celebratory drink is called for in the Mucky Duck' as Boris might say.
- February 02, 2016

Another lovely early Autumn day and we are back on the Shakespeare' Avon Way. Starting point is the village of Ryton on Dunsmore.  Leav... 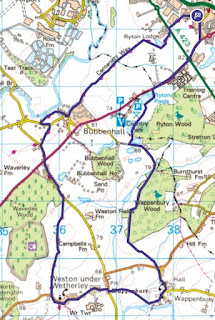